Tonight I was aurally transported. I attended a choral concert of Gabriel Faure’s Requiem in Falls Church, Virginia, and instantly, my mind went to Salzburg, Austria in the spring of 1974. Hearing this elegant, ethereal, even transluscent, piece of music brought back many memories.

I was a young college student spending six months studying abroad in Salzburg with a group of 55 students. Our dormitory was an old hotel that had been rented by the university in Elsbethen, a small town about an hour from the city. Our meals were prepared for us in the hotel. I’d never been a potato eater, but I soon learned that I would starve if I didn’t potatoes. I ended up gaining 20 pounds. Everything tasted so good. Across the street was a small grocery with a barn next to it. The smells of rural Austria in the spring were pungent and new to me.

Part of our educational experience in Salzburg included an agreement between our university and the Mozarteum, a music conservatory in the city, that we students who wanted to could sing in the Mozarteum choir. Many of us also studied piano, cello, and in my case, harpsichord. (That’s another story.) The choir rehearsed every Tuesday afternoon as I recall.

Our choir director was a graduate student in conducting who was preparing a spring concert as his final project before graduation. He was in his twenties. He had long brown hair, very bad teeth, and smoked during rehearsals. He wore tight blue jeans, white T-shirt, boots, and a leather jacket. He looked, to me, like he belonged on a Harley or in a rock-n-roll band, more than as a classical musician wielding a baton. He sat on a stool with his back hunched as he studied the music score in front of him. His English was better than my German which made me nervous as he spoke German when he was frustrated.

We practiced and practiced over many weeks. I grew to know this music so that I heard it in my mind while I walked the foothills, while I did my homework, while I fell asleep. My religious background did not include learning the Latin words of the traditional Requiem form, but I came to feel the power of the text:

I stood next to my friend, Anne, on the night of the performance. I remember looking out at a large audience of strangers in this very old, but grand, concert hall. Then our conductor came out on stage, transformed (as men always are) in a tuxedo. Everything came together that night into an evening of transcendence for me as a young musician. I experienced something I had never known before and can’t really describe, but I know it as something that satisfies me deeply on a level that is unequaled. Sound, energy, heart, vibration, community, unity. It’s the most alive experience to participate in a musical ensemble. It was sheer beauty. Maybe for me, that performance was like a first successful marathon, or a first view of Grand Canyon, or being at the feet of Jesus.

I returned there tonight. 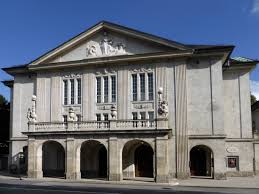 Here’s a link to In Paradisum, sung by The Cambridge Singers: